THROUGH THE LOOKING GLASS

"Here!" cried Alice. She jumped up in such a hurry that she tipped over the jury-box, upsetting all the jurymen on to the heads of the crowd below.

"Oh, I beg your pardon!" she exclaimed in a tone of great dismay.

"The trial cannot proceed," said the King, "until all the jurymen are back in their proper places—all," he repeated with great emphasis, looking hard at Alice.

"What do you know about this business?" the King said to Alice.

"Nothing whatever," said Alice.

The King then read from his book: "Rule forty-two. All persons more than a mile high to leave the court."

The King turned pale and shut his note-book hastily. "Consider your verdict," he said to the jury, in a low, trembling voice.

"There's more evidence to come yet, please Your Majesty," said the White Rabbit, jumping up in a great hurry. "This paper has just been picked up. It seems to be a letter written by the prisoner to—to somebody." He unfolded the paper as he spoke and added, "It isn't a letter, after all; it's a set of verses."

"Please, Your Majesty," said the Knave, "I didn't write it and they can't prove that I did; there's no name signed at the end."

"You must have meant some mischief, or else you'd have signed your name like an honest man," said the King. There was a general clapping of hands at this.

"Read them," he added, turning to the White Rabbit.

There was dead silence in the court whilst the White Rabbit read out the verses.

"That's the most important piece of evidence we've heard yet," said the King.

"I don't believe there's an atom of meaning in it," ventured Alice.

"If there's no meaning in it," said the King, "that saves a world of trouble, you know, as we needn't try to find any. Let the jury consider their verdict."

"No, no!" said the Queen. "Sentence first—verdict afterwards."

"Stuff and nonsense!" said Alice loudly. "The idea of having the sentence first!"

"Off with her head!" the Queen shouted at the top of her voice. Nobody moved.

"Who cares for you?" said Alice (she had grown to her full size by this time). "You're nothing but a pack of cards!"

At this, the whole pack rose up in the air and came flying down upon her; she gave a little scream, half of fright and half of anger, and tried to beat them off, and found herself lying on the bank, with her head in the lap of her sister, who was gently brushing away some dead leaves that had fluttered down from the trees upon her face.

"Oh, I've had such a curious dream!" said Alice. And she told her sister, as well as she could remember them, all these strange adventures of hers that you have just been reading about. Alice got up and ran off, thinking while she ran, as well she might, what a wonderful dream it had been.

Did you enjoy Alice's Adventures? 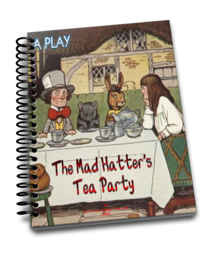 Return to Chapter I