As the automobile driven by Uncle Toby and containing the Curlytops and their playmates came to a stop near the side entrance to Mr. Bardeen's house, the door opened, letting out a stream of light on the white snow.

"Is that the police?" asked a voice which Ted remembered as that of Mrs. Watson, or "Aunt Sallie," as Uncle Toby called her.

"No, this isn't the police," Uncle Toby answered, through the half-opened door of the car that Ted had unlatched, ready to leap out.

Aunt Sallie did not seem to know Uncle Toby's voice, for she asked another question.

"Is it the firemen then?"

"Good gracious!" cried Uncle Toby, opening the automobile door wider, so that a swirl of snow drifted in. "What in the world is the matter? Why do you want the firemen and policemen, Aunt Sallie?"

"Yes! Yes!" was the quick answer. "You stay in the car a moment, children," said Mr. Bardeen, as he got out on the side of the steering wheel. "Something must have happened. I'll see what it is."

Just then the crowd, which stood partly in the street and partly in the yard of Uncle Toby's house, but up at the farther end, away from the driveway, gave a shout.

"There he goes!" cried several voices.

"What can have happened?" exclaimed Janet, greatly excited.

"It's a fire, I guess," said Ted. "Aunt Sallie was asking for the firemen."

"And she asked for the policemen, too," said Tom. "Maybe it's a burglar up on the roof."

"That's right!" chimed in Harry, the new boy. "And maybe he's trying to go down the chimney."

"Like Santa Claus," added his sister Mary, whom Jan and Lola had begun to like very much.

"I want to see Santa C'aus!" cried Trouble, and he made a wiggle to get out of the open door by which Uncle Toby had left.

"No! No!" cried Ted, catching hold of his little brother.

"Something has happened, anyhow," decided Tom. "This crowd wouldn't be here for nothing. But I don't believe it's a fire, for there isn't any smoke. I guess the reason Aunt Sallie wanted the firemen was because they have ladders to get somebody down off the roof."

"Who could be up on the roof?" Jan wanted to know.

No one answered, but as both front doors of the closed automobile were now open the children could hear what Uncle Toby and Aunt Sallie were saying.

"What in the world has happened?" asked Uncle Toby.

"It's Jack, your monkey," was the answer. "He got loose a little while ago and scrambled up on the roof. He's perched there now, near the chimney. First I knew of it was when I saw a lot of boys in front of the house, looking up. I thought the chimney was on fire."

"Was that why you wanted the firemen?" asked Uncle Toby.

"Partly," answered Aunt Sallie. "I telephoned for the fire department, and when I heard your automobile in the side yard I thought it was the firemen."

"But why did you send for the firemen when you found out the chimney wasn't burning?" Uncle Toby asked.

"I thought they could get the monkey down with ladders," was the housekeeper's reply.

"Then why did you send for the police?" went on Uncle Toby.

"To keep the crowd in order," sighed Aunt Sallie. "Oh, I've had such a time! Some of the boys cut up so, and threw snowballs at Jack."

"My goodness! That's so, it is snowing!" cried Uncle Toby, as if, for the time, he had forgotten all about it. "Poor Jack will catch his death of cold up there on the roof in the storm. How did he get out? Never mind; don't tell me now! I must get him down before he gets pneumonia. Monkeys are very likely to get that if they get a chill."

"One of your old ones," answered Aunt Sallie. "He grabbed it up off the rack as he scrambled out of the window and climbed the rain-water pipe to the roof. If anyone can get him down, you can, Uncle Toby."

"Yes, I guess I can. Jack always minds me. But it's hard to see him in the dark."

"Oh, the electric light in front shines right on the roof," replied Aunt Sallie. "And as the roof is white with snow, Jack shows quite plain. Do get him down so the crowd will go away."

"Are the rest of the pets all right?" asked Mr. Bardeen.

"Yes," said Aunt Sallie, and the listening children were glad to hear this.

"Come on in, Curlytops!" called Uncle Toby from the side porch. "There isn't anything serious the matter. Jack has just gotten up on the roof, that's all. It isn't the first time, for he often does it in summer, but I never knew him to go out in the cold before. I guess he wants to show that he'd be all right for taking out to Crystal Lake, but I'm not going to humor him. Come on in Curlytops and the rest of you children!"

Out of the car scrambled the children, eager to see and hear all that was going on. They had hardly more than reached the porch than out in front of Uncle Toby's house sounded a rapidly clanging bell.

And, surely enough, in the electrically lighted street could be seen the glittering fire engine and the hook and ladder truck, with prancing horses which seemed to delight being out in the storm.

There was a roaring murmur from the crowd, and Uncle Toby looked at Aunt Sallie and shook his head.

"You surely have caused some excitement around here," he said, but he could not help laughing.

He squirmed and struggled so that it seemed as if he would break away from Janet. Uncle Toby and Aunt Sallie had gone around to the front of the house to meet some of the firemen who were asking where the blaze was as they did not see any smoke.

"Be good, Trouble!" begged Lola, trying to help Janet manage the little fellow, who was tired and cross from the long day's ride.

"Want to see fire engines!" he insisted, for the engine and truck were now out of view from the side porch, having drawn up farther along the street.

"Oh, maybe the police wagon will come and you can see it from here," added Mary, trying to do her best to aid in soothing William.

And, surely enough, just then the police patrol wagon, with its clanging bell, not quite as loud as the fire engine, though, came up and a number of officers jumped out. There was another roar from the crowd as this added excitement was provided. Never had there been such an evening in Pocono, with the big storm getting worse all the while.

But Uncle Toby took charge of matters. He explained to the police and the firemen what had happened—that Aunt Sallie had become so excited she had summoned more help than she had really needed.

"But is there really a monkey up on the roof?" asked a policeman.

"Yes, my monkey Jack is up there near the chimney," said Mr. Bardeen. "You can see him. He's got on one of my coats."

Without a doubt there was Jack, sitting on the ridge of the roof, one hairy paw thrust through an arm of the coat, clinging to the bricks of the chimney.

"I'd like to get him down," said Uncle Toby, "for he is a valuable animal, and he may take cold and get pneumonia even if he has on a coat."

"Well, we're the boys to get him down," laughed one of the firemen. "But will he bite?" he asked anxiously. "I don't know much about monkeys, but I guess they can bite."

"Jack won't; that is, not after I speak to him," said Uncle Toby. "I'll call him to come down, and you can go up on a ladder and get him if you will."

"Oh, we'll do it all right," said the fireman. He and the police officers knew and liked Uncle Toby.

Shortly afterward a ladder was raised to the roof, and a fireman went up. He had to be careful on the sloping roof, on account of the slippery snow that covered it. But another ladder, laid on the shingles, gave him a firm footing.

Nearer and nearer he crawled to the crouching monkey. The crowd, which had been laughing and joking, kept quiet now so Uncle Toby could talk to Jack.

"Come on down, old fellow! Let the fireman bring you down. And don't bite him!" called Uncle Toby to his pet.

Jack seemed to understand. He chattered a little, and then, when the fireman was near enough, the monkey put his arms around the man's neck and clung tightly.

"Now you're all right, old chap!" said the fireman, who was fond of animals. "I've got you!"

A little later man and monkey were safe on the ground, while the crowd cheered. Uncle Toby took Jack from the fireman, and the monkey nestled in his master's arms, seemingly very glad to be down off the roof and out of the storm.

"I must get him some hot milk to drink," said Uncle Toby, as the firemen and police started back to their quarters. The crowd, seeing that there was to be no more excitement, melted away out of the storm.

"Come, Curlytops, get in the house! All of you get in the house out of the storm!" cried Uncle Toby, for the children had gone around to the front to watch the rescue of Jack.

"Yes, yes! Come in!" cried Aunt Sallie. "You'll all get your deaths of sneezes! Talk about hot milk for a monkey! I guess these children need it more than Jack does!"

"We'll all have some hot milk!" declared Uncle Toby. "Here, Aunt Sallie, you look after the Curlytops and their friends while I put the car away, and then I'll come back and we'll have a cozy supper," went on Mr. Bardeen. "I'll put Jack by the fire to thaw him out."

"Bless your heart! you shall have something to eat as soon as I can get it on the table," said Aunt Sallie. "That bad old Jack made a lot of work!"

She shook a finger at the monkey, who whimpered a little.

"Will he do tricks?" asked Tom.

"He's done enough tricks for one night," replied Aunt Sallie, as she bustled about to get supper, while Uncle Toby put the car out of the storm.

"Take off your hat, Mary," suggested Jan to the new girl, who stood about a bit shyly.

Before the little girl could do this her hat was suddenly snatched from her head, and a harsh voice cried: 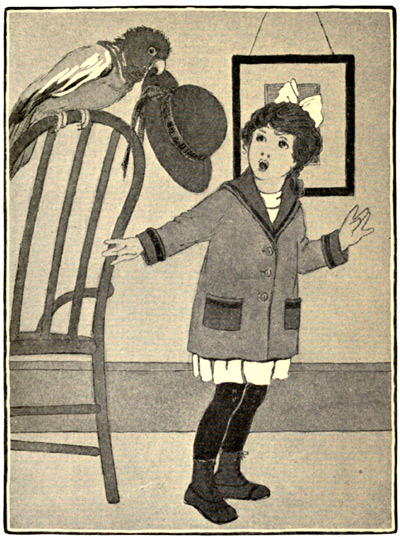